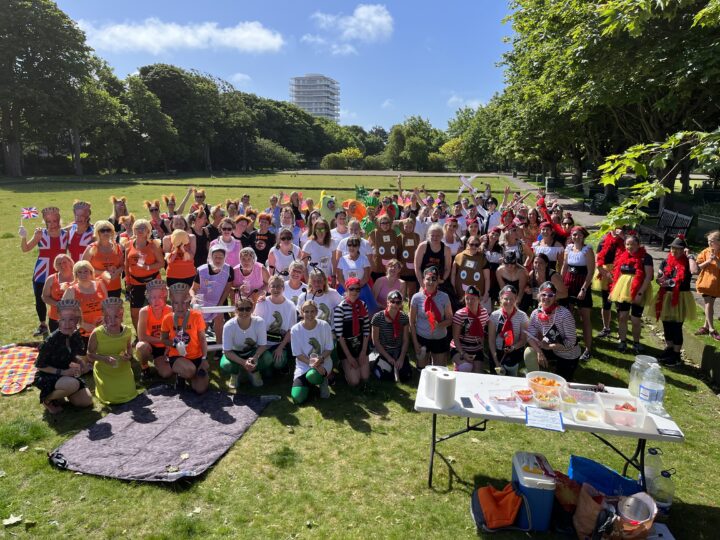 It has become tradition in our club to have a fun, free annual summer event that basically involves running around in outfits, having a laugh and winning some points along the way.

Previous years have seen the Great Escape around Cissbury Ring and surrounding areas, and The Enormous Escapade in Swanbourne Lake, Arundel.

This year we had a slight twist on it, it was a treasure hunt with organised clues around some of the streets, promenade and town centre of Worthing.

Half the club in attendance

18 teams of 6 members took part and it was open to everyone including our youth members.  We aim to make these events as inclusive as possible so all our members can join in no matter their ability, fitness levels, pace or distance. Points were given based on team names, outfits, team criteria (to include injured, foxes from different sessions, young and older ladies), number of clue stops attended, best team photo with mystery item, team video and collages, first to the start and finish and bonus points collected en route for various tasks.

The spirits were high on arrival after solving the first clue issued on Facebook to get them to the start. We had marshals on bikes rotating, quickly cycling between different clue stops as the teams worked their way round. They were solving the clues and sometimes earning bonus points for things like burpees, bingo call outs or taking the stairs to the top of the multi-storey or simply taking team photos at certain points.

The outfits are always a winner

So much effort had gone into the outfits from pirates and royalty, to birds and fruit, from air stewards to super heroes and from inflatable poo’s to Abba and rainbow fairies!

There was a little chaos in the beginning when one team unknowingly went to the end destination, Beach House Gardens instead of Marine Gardens, after misreading the clue and then starting an hour behind everyone. They soon joined in and threw themselves into the fun.

After 18 clues and about 3.5 miles almost every team made it to the finish, where they were greeted with refreshments and homemade cakes.

Winners and points were announced later that day when everything had been collated and points awarded for videos and montages produced by the teams.

It was a fabulous day with lots of effort from everyone, big thank you to all the teams that took part and all the leaders and marshals that helped make it happen.