Foxy Ladies started in December 2013 with just 3 friends led by myself (Julia). At the time I was already a qualified leader in running fitness  (LIRF)  through the set up and running of the successful Vale School Children’s Running Club, so I had a basic knowledge of how to put together run sessions and be able to give some guidance on running.

I got together with a small group of close friends, they already had a level of fitness and running ability but had never taken their running any further. We started one cold Thursday morning in December.
By January our club had more than doubled its size through word of mouth and friends of friends joining.

Prior to this I had started training one of my best friends Georgina, it was so rewarding that I knew it was something I was keen to develop further. I had trained her from complete beginner to half marathon runner in 8 months. I then studied hard for 6 months to become a qualified CIRF ”Coach in Running Fitness”  and used everything I was learning in my course and put it straight into practice with my sessions, becoming qualified in July 2014. This knowledge meant I could help other ladies get up and running and start taking on complete beginners.

When searching for a club to join myself back in 2009,  most running clubs only offered evening sessions at a time when my children would be needing dinner, bath & bed and my husband wasn’t back from work. Or they were only interested if you were able to run at a certain pace.

I really wanted to be a different kind of club very much focused on fun as well as running but to be able to offer something a bit different from the traditional track or road clubs in our area. I wanted to offer sessions for women that could be carried out during the day when the children were at school or preschool and would be available to all abilities regardless of pace.

The club had grown over the spring and summer months and once qualified as a coach, the first learn to run course was launched in September 2014. From then onwards every 0-5km learn to run course capacity sold out, this showed the need for groups like this to be set up in our local area.

Enquiries from existing runners came through and further sessions were offered and the need to recruit run leaders to help with the increasing demand became apparent.

Our lovely Run Leaders attended the Run England/England Athletics training day and were put into action as soon as they were qualified. Over time the sessions became formatted, developed, took shape and organised into themes, more days and times were offered to accommodate busy ladies and their lifestyles.

I measured the growth of the club each year based on attendance at the end of year party that we host every November. The first couple of years I was able to hold this in my house and then as the years have gone on the venues have grown from small restaurants to function rooms to now taking over entire venues which is just fantastic!

We are now able to offer sessions or runs on every day of the week and have 150 members that are looked after by six enthusiastic qualified run leaders along with myself.

I firmly believe that anyone can run, they just have to have a belief in themselves and with our support and encouragement we can give them the guidance they need to start and progress. 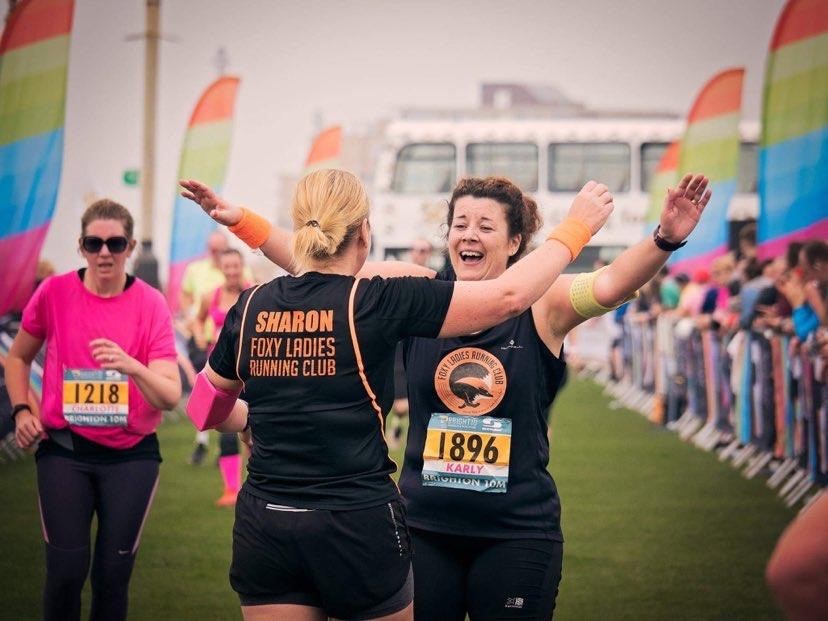 This is what we are all about...

Many of our members have benefitted from the free workshops we arrange regularly to give tips and advice and often to encourage them to try different things as well as running. In the past we have hosted introductory yoga classes and pole fit classes, make up & beauty advice workshop hosted by external providers as well as swim n run sessions in Arundel Lido organised by the club. Our in house workshops have included; - Injury Prevention talk - Marathon planning, training and tips and nutritional advice - Runner Foot Injury Prevention - Sports Clothes Swap. With many more planned to follow soon.

Foxy Ladies Running Club likes to give back where and when we can whether its sponsoring, donating or getting our hands dirty. Our ladies are often taking part and running races for a local or national charity these can be anything from 5km races right through to Marathons and Ultras. All are well supported and sponsored by members of the club and we all delight in hearing about not only how much money has been raised but the awareness for the charity too. We like to get involved in large events like Comic Relief, Sport Relief and Children in Need but also the small independent charities that have supported members and their loved ones through difficult times. Our recent fundraiser was a charity clothes swap event which involved members donating five items of preloved sportswear and £5 in a charity pot and then they could take home five other items. We have also donated hours in terms of Foxy volunteers giving up their time to sand down, wash and decorate the upstairs landing and lift area of the Creative Heart Community Hub in Littlehampton. A unique space which is designed to bring all members of the community together in one place.

Legend has it... those that run together party together and we can confirm this is true! The Foxy Ladies really do know how to party, and we find ourselves with many opportunities during the year. As well as meet ups down the pub or in a coffee shop, there are beach picnics and supporting local events, birthday celebrations and outings. We also celebrate the club's anniversary with an end of year do in November. This is always the biggie .... starting early in the evening dressed in our sparkly numbers, there is eating drinking, dancing, games and the Prestigous Foxy Awards to look forward to.