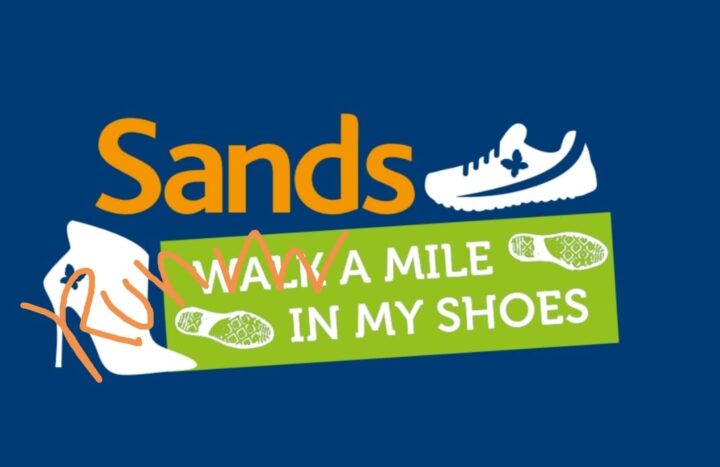 Four incredibly strong women come together to share their losses, to support each other and raise awareness.

Caroline, Emma, Karen and Michelle were initially united through running but now been bought closer together through sharing their experiences of the loss of their precious little ones. These four amazing women meet up to support each other which makes them feel more comfortable and able to talk about and share their stories.

These ladies thought would be good to raise awareness and support for others inside the club . They wanted to help other club members who perhaps wanted to run and chat about their own experiences. They began organising ‘Run a mile in my Shoes’ which are run and talk runs for SANDS Stillbirth and neonatal death society https://www.sands.org.uk/about-sands . SANDS organised ‘Walk a Mile in My shoes’ which our girls adapted to Run a mile in my shoes. They received an overwhelming response and have already held a few runs but have now sadly had to limit the numbers to be in line with government guidelines and Covid19 safety restrictions.

When I joined this running club it was about getting fit, challenging myself and achieving my goals! But…. it’s so much more! I have met some extremely strong ladies who have been through something a women should never have to deal with…. the loss of a much loved and wanted child. Some find it difficult to talk about this but through the Foxy Ladies, we have talked, ran and shared our experiences, I will be forever grateful to know such strong and inspiring women who have without a doubt made this something we can open up about and share our grief. We have hosted some run and talk sessions linked to the SANDS Charity, Run a Mile in my Shoes, raising awareness and supporting each other. It’s very comforting to see how it can bring us together even more.

After a long and difficult journey, I became pregnant in 2017.  Very early on I was told that I was carrying identical twins who were joined at the placenta.  This meant that they would be sharing a blood supply and could be at risk of Twin to Twin Transfusion Syndrome (TTTS) where the twins could share unequal amounts of blood flow.  We were referred to the multiple pregnancy unit at University College London Hospital (UCLH) where I was monitored with scans every couple of weeks.  We were already very anxious about my pregnancy so found this all quite overwhelming.

At around 26 weeks pregnant and on the August bank holiday weekend, I woke up concerned that I could feel much less movement from the twins.  We called the hospital and made the long journey from Worthing to Euston to have scan at UCLH.  The nurse could only find one heartbeat on the monitor and called in someone else to help her but unfortunately the team couldn’t find the heartbeat of our smallest twin Stanley.  Sadly, around four weeks later, Mylo passed away too. Our twins had lost their lives due to TTTS.  At 31 weeks I was induced and gave birth to our twins naturally at the hospital on 22nd September 2017. As you can imagine this was a traumatic and upsetting experience for both Paul and me.

The whole team at UCLH were incredible and both us and the twins were treated with so much kindness, dignity and respect.  Unfortunately, one stillborn baby is born every day at UCLH and the hospital has its own room, the butterfly suite, for families like ours.  Following their birth, we were given hand and footprints for Mylo and Stanley, photographs and a memory box to take home.   This was all made possible thanks to the work of three amazing charities: The Butterfly Fund at UCLH, SANDS and 4Louis.

Life since the twins’ birth has been hard and both Paul and I have tried to find different ways to help us cope.  This has included running, which as well as helping us clear our minds, has allowed us to help raise money for TAMBA – The Twin And Multiple Birth Association – through the London Marathon (Paul!) and for SANDS – the Stillbirth and Neonatal Death charity – through the Cardiff half marathon and Great South Run (both of us!).

When I joined the Foxy Ladies about a year after the twins were born, I didn’t tell anyone about my experience.  I was feeling unfit and not very confident.  Unfortunately, stillbirth is a taboo subject in our society, and I was worried about people not wanting to talk to me or what they might think.  I soon found the group to be so supportive and both my confidence in running and talking to others grew.

I noticed on our Foxy Facebook page one day a fellow fox wearing a 4Louis running top.  I reached out and contacted Michelle as I thought either she had been through this experience herself or she knew someone who had.    We arranged to meet for a hot chocolate and spoke about losing our babies.  Speaking to someone who has been through a similar experience to you suddenly takes the weight off your shoulders as you’ve found someone who ‘just gets it’.

Our running club is so social and inclusive that after talking to other friends we found out about another fox, Caroline, who had experienced stillbirth too.  Our little group grew further when we met Karen who had lost her son early in his life.  Meeting each other, talking about our babies and what we had been through has meant so much to me and allowed me to better deal with the grief of losing Mylo and Stanley.

Run a Mile in My Shoes

During lockdown so many foxes took part in a sponsored run for the charity 4Louis and ran to mark Caroline’s son’s birthday too.  It was like a breath of fresh air and gave me personally the courage to talk more openly about my experience of stillbirth.  When I saw SANDS promoting their latest campaign ‘Walk a Mile in My Shoes’ I knew that this was something that us foxes could get involved in – but in true foxy style we would run not walk!

As a group, we have started to organise some short, inclusive runs where our fellow foxy ladies could come, chat, ask questions but most importantly be together and share our collective experiences of baby loss.  Being an all-female running group and coming from a place of support and encouragement felt like such an important opportunity for us to get together.  Our aim is to raise awareness of baby loss and to try and make this something that is more acceptable to talk about.  If we manage to raise some vital funds for SANDS along the way, then even better!

This is Jack, Jack Adam Blunsdon, ‘ chunky monkey’Jack was born on the 11th January 2006.

After a traumatic birth, with Jack requiring resuscitation and ventilation, we made it to SCBU. Nobody knew what was the matter with him, all we knew was that he was very little, very poorly, but a fighter. I had a normal pregnancy and up until the minute he arrived we didn’t know anything was wrong, and so the rollercoaster ride of our lives began.

We spent the first 6 weeks of Jacks life in intensive care, with the amazing Drs and nurses at St George’s hospital, Tooting, managing to get Jack to breathe on his own. He was still really floppy, could only feed from a tube and couldn’t swallow, but he was alive and that’s all that mattered. We were going home…..

Life became a whirlwind of hospital admissions, and medical appointments, but Jack was holding his own and becoming quite a character.

At 7 months old and during a particularly long hospital stay, Jack was diagnosed with X-linked myotubular myopathy (XLMTM) which is a rare genetic neuromuscular disorder that is characterised by muscle weakness and is most typically severe but can range from mild to profound. Our world came tumbling down.

This particular hospital admission was for Jack to have another operation to help him keep his food down and also to look into his breathing. The results weren’t good and Jack was put on Bipap a non- invasive form of ventilation.

A long conversation with a specialist told us that Jacks time was limited, he was already beginning to struggle and his health was deteriorating. We were lucky we had another amazing 5 months with Jack. Everyday he fought, and so did we. We weren’t giving up until he did.

On the 11th January 2007, Jacks first birthday, he passed away. Our beautiful, brave little boy ran out of strength to carry on fighting, and so we said goodbye.

There is nothing that anybody can do or say to stop the pain, but there are wonderful people like those that gave support from the Myotublar Trust https://myotubulartrust.org/ they have lived and are living your life, felt the highs and lows, the good and bad. They are there for advice, to shout and swear at, but most of all to listen and understand what you are feeling.

The Myotubular Trust was the only support network I had in those early days, and they literally helped me keep my sanity in the darkest of days.

I wanted to be involved in the ‘Run a Mile in my Shoes’ so that by talking about Jack, it makes me feel like he is acknowledged and never forgotten about. He made his mark for the short time he was here and talking about him keeps that little bit of him alive

I’d really like to express my gratitude for the support and friendship give by Emma Caroline and Michelle. Losing a baby is unthinkable, talking about your feelings and your mental health to strangers feels uncomfortable. You don’t know how they will react talking about such an emotive subject, but these ladies get it, they’ve been there, they understand, as have so many other Foxy’s. I should have realised that joining a women’s running group would bring more than sweaty lycra and stinky trainers. I’ve made lifelong friendships with so many strong, supportive, kind, and caring women. Thank you Foxy’s.

Karen continues to raise money for the fantastic charity and given the current climate funds are very crucial at the moment if you wish to donate please click on this link https://cafdonate.cafonline.org/2116?fbclid=IwAR16gmzKz2Mn_hcsT1jVORbeuXgWbuaznXDZ6FeKO23rvZ0cBMVfjIT0_pI#!/DonationDetails#%2FDonationDetails

I ran the London Landmarks half marathon last year and was supporting a charity Run 4 Louis https://www.facebook.com/run4louis/ running in memory of my two babies Angel and Katie who I’d lost in pregnancy.

Another Foxy member Emma contacted me and we met for coffee. I will never forget that day. We talked and talked about our babies. Emma was so honest and open about her twin boys and for the first time I realised it was ok to talk about my girls. For years I’d felt that I was making people feel uncomfortable when I mentioned my babies so just avoided it.

We have now also met two other strong, amazing and inspirational women, Caroline and Karen who have again shown me it’s OK to talk, to share, to cry , to be proud of our babies. We all talk, we run , we drink coffee (or Prosecco) we’re there for each other and I cannot thank these girls enough.

I am just so thankful I joined. It’s so much more than a running group.