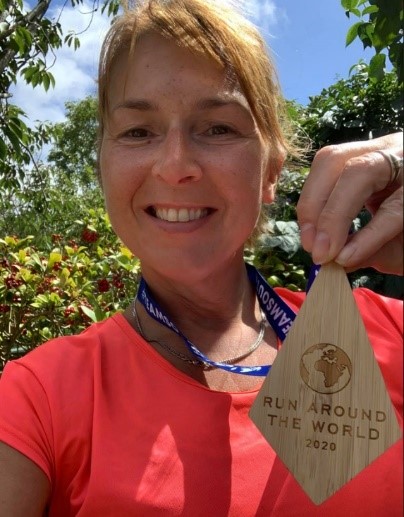 Lockdown has been going on a long while and during that time the Foxy Ladies have been doing some great challenges. In June a virtual challenge popped up in my Facebook feed from the amazing ‘Run Things’. Run Things is a virtual challenge organisation who raises money for Mind the mental health challenge which is a great cause and one close to mine and lots of other foxes hearts. https://runthings.co.uk/ My ears pricked up as at Christmas we had participated in a challenge called ‘Run up to Christmas’ which had been lots of fun and earnt us a fabulous Christmas Tree Medal.

Virtual Is the way forward during the uncertainty

The great thing about a virtual challenge is that instead of attending a ‘Race day’ at an official time and place, runners can take part in the time and place of their choice and can run a distance they are comfortable with. This meant that Foxes who were injured could also take part in this challenge which made it really inclusive. It was also a great way to increase motivation for all members of the club. You also received a medal at the end and it was an ‘eco’ wooden medal!

The idea of the challenge was to try and run as far round the world as you can during the month of July. Not only were you running and seeing your own total of miles run grow but you were contributing to the grand total of miles for the Foxy Ladies team.

Every run counted and we had 85 Foxy Ladies taking part. The team spirit was amazing and everyone was getting out there and really adding to the fantastic total of 7839km / 4570 miles that we completed during the challenge. Total duration was 1324 hours of running which is over 55 days. and Foxy Ladies ran the furthest of all the teams representing Team South!

The feedback was really positive with ladies saying how motivating they found the challenge especially as summer running is much harder and then nicely topped off with the satisfaction that we raised a considerable sum for ‘Mind’.

By Clare Packer – Foxy Organiser for the RATW Challenge